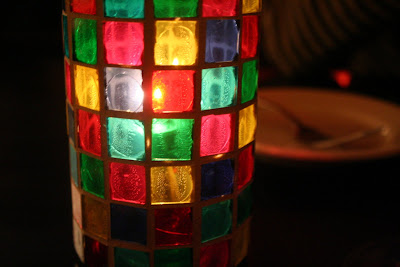 Five years ago today that is. It seems like yesterday that we said our vows, yet I feel like I've known Joel forever. 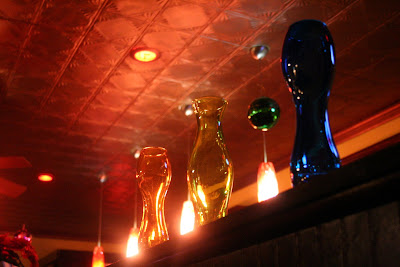 We celebrated by cleaning house. (oddly satisfying), and dining out at one of our favourite eateries. God is so good, and blesses us beyond belief. It really was a wonderful day and my life is wonderful as your wife honey. I love you. Here's to spending a zillion more years together. 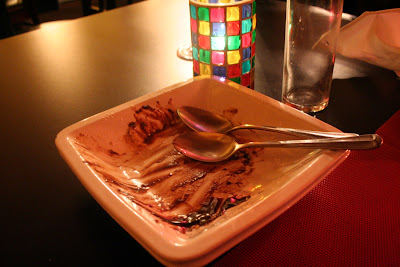 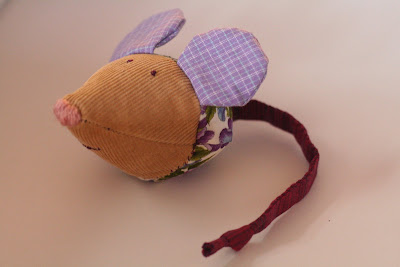 I finished! With little to no time to spare. I had this idea to make a toy mouse for Phoebe. I had seen one in a catalog online, and almost bought it but thought it would be so much cuter handmade. I think I was right. Even with all its crazy stitching, and lopsidedness. I stuffed a bell inside for added jingling, and filled it with old plastic shopping bags needing to be recycled. This lil' gal with definitely be getting some friends just like her real soon. For now, she is waiting in Phoebe's stocking to get some kitty hugging.

I hope you all found the time and will to finish all you last minute preparations. Merry Christmas, and may you all enjoy this awesome season given to us by our Lord Jesus Christ!
Posted by Grace at 9:03 AM 4 comments: 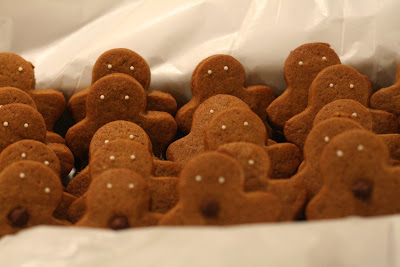 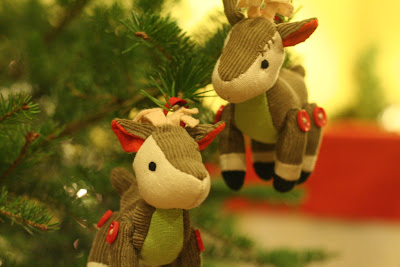 We made these little chocolate chip buttoned gingerbread men today. Even though I don't like gingerbread. And these cute little reindeer are from none other than starbucks. Courtesy of my father. Truly it is the sweetest season.
Posted by Grace at 4:09 PM 1 comment: 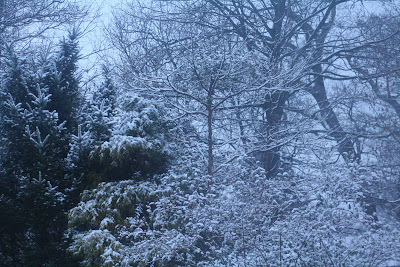 This is what it looked like outside yesterday afternoon. Perfectly sticky and white.
Unfortunately it didn't stay very long, and it was too wet to play in any way. Fine for us drivers, but a little difficult to explain to two and a half year olds who are just catching on to the magic.
I am just about done with my Christmas shopping. I had high hopes of hand making every one on my list something special. But it did not exactly work out that way.

We have been reading a wonderful collection of Advent readings compiled by the many pastors of our churches. It has been such a blessing to our family so far! We are learning and enjoying as we acknowledge the real meaning behind this blessed Holiday.

The rest of the week I will continue to detox the toy stash, and me and the kitties will be baking cookies galore! I'll be back with photos of the fun, and finished packages. 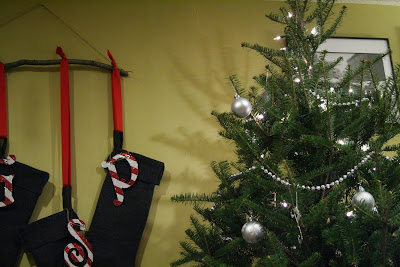 The goose is getting fat, put another penny in the old man's hat. I sing this sometimes. At random intervals during the day. And dear little Sammy has started to sing it too. I sound ridiculous, he's just cute.

I knit myself a hat from some super chunky yarn I had bought last year. It came out cute, and I've been wearing it all weekend, inside and out. But after seeing this, I realize I did not make what I should have made, and now I need to find some more yarn. But Since I have an overflowing stash this should not pose a problem.

Whilst browsing I stumbled upon this. Since I use skype about 4 times a week, it made its way right onto my amazon wishlist via that sturdy little button they give you for free. The button is right there on my toolbar, and did I mention it's free?! Brilliant.
Posted by Grace at 6:10 PM No comments: 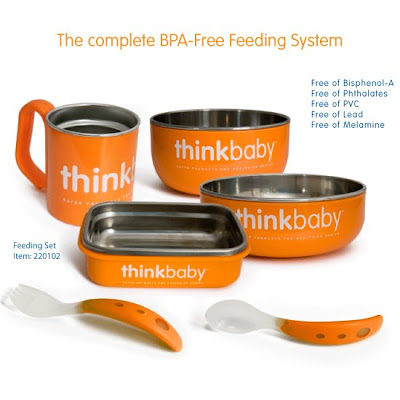 Email ThisBlogThis!Share to TwitterShare to FacebookShare to Pinterest
Labels: babies

If we could reduce the world’s population to a village of precisely 100 people, with all existing human ratios remaining the same, the demographics would look something like this:
The village would have 60 Asians, 14 Africans, 12 Europeans, 8 Latin Americans, 5 from the USA and Canada, and 1 from the South Pacific
51 would be male, 49 would be female
82 would be non-white; 18 white
67 would be non-Christian; 33 would be Christian
80 would live in substandard housing
67 would be unable to read
50 would be malnourished and 1 dying of starvation
33 would be without access to a safe water supply
39 would lack access to improved sanitation24 would not have any electricity (And of the 76 that do have electricity, most would only use it for light at night.)
7 people would have access to the Internet
1 would have a college education
1 would have HIV
2 would be near birth; 1 near death
5 would control 32% of the entire world’s wealth; all 5 would be US citizens
33 would be receiving --and attempting to live on-- only 3% of the income of “the village”
Posted by Grace at 12:12 PM 1 comment:

Email ThisBlogThis!Share to TwitterShare to FacebookShare to Pinterest
Labels: info 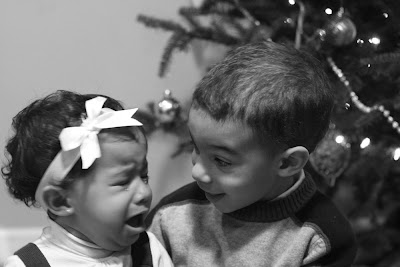 It was time for us to take our annual Christmas pictures. But, due to bad planning and timing, the session started at 8 p.m. So not smart. Lucky we did get some good enough for printing.
Posted by Grace at 6:36 AM 5 comments:

Email ThisBlogThis!Share to TwitterShare to FacebookShare to Pinterest
Labels: Christmas 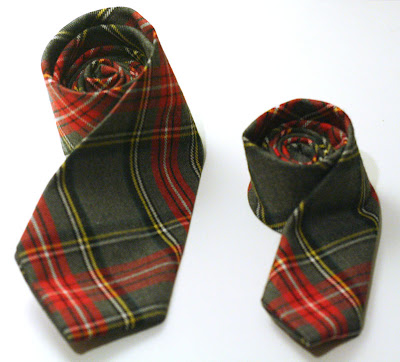 Matching father/son ties in plaid for Christmas.
Similar to these ties over here in Joanna's gift guide, but cheaper and more fun in red. ;)
In my Shop.
Posted by Grace at 3:49 PM 2 comments:

Not from me, but you can enter over here!
And if you don't know who Jamie Oliver is, you should find out Asap.
Posted by Grace at 8:01 AM No comments:

Email ThisBlogThis!Share to TwitterShare to FacebookShare to Pinterest
Labels: giveaways 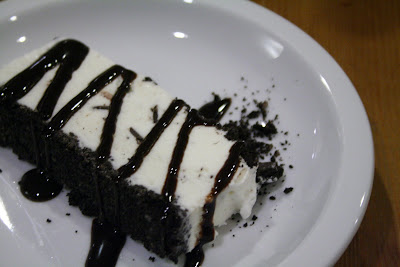 Birthday ice cream cake.
Posted by Grace at 8:52 AM No comments:

Have you seen this crazyness?
Posted by Grace at 8:51 AM No comments: 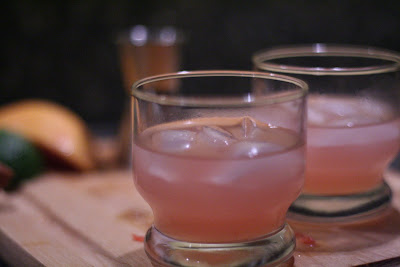 Mix the juice of one pink grapefruit and one lime with simple syrup or sugar to taste, a shot of vodka and ice. Stir, and add a lemon wedge as garnish. 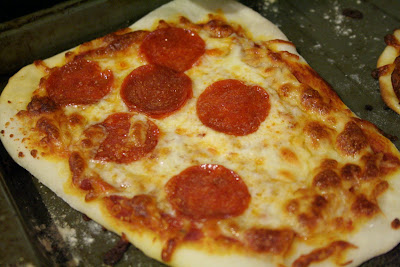 We've been making pizza! As a family who really enjoys cooking and the art of food, we watch our fair share of cooking shows. This has totally rubbed of on Sam and Phoebe lately. They love getting into the kitchen with all its tools and splendor. We made this, and some broccoli pepperoni pies. Sam says "I don't want dinner anymore, I want broccoli".....................
Yes sir.
Posted by Grace at 11:56 AM No comments: 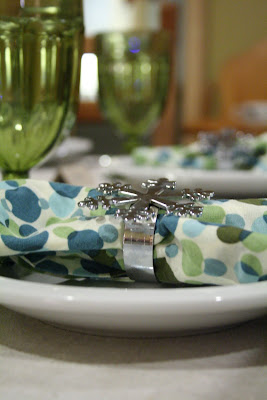 Joel turned twenty-nine right before thanksgiving. I think it was the best birthday party I've ever thrown. I love you babe.
Posted by Grace at 10:25 AM 2 comments:

Grace
I like to cook, eat, love my husband, love my babies, sew, knit and look at pretty things. When I have the time, I talk about these things here.